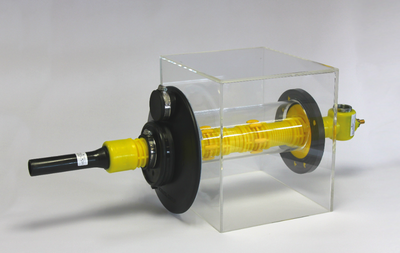 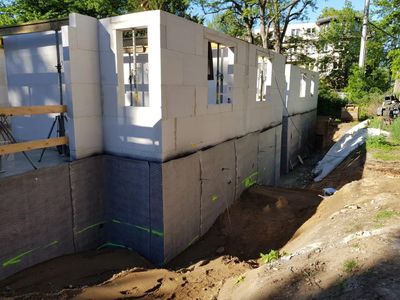 View into the excavation

The building is in the shell, the building seal in accordance with DIN 18533 W2.1 has already been applied to the basement wall in the form of a PMBC (KMB) * external coating. The building stands near the bank of a large river. 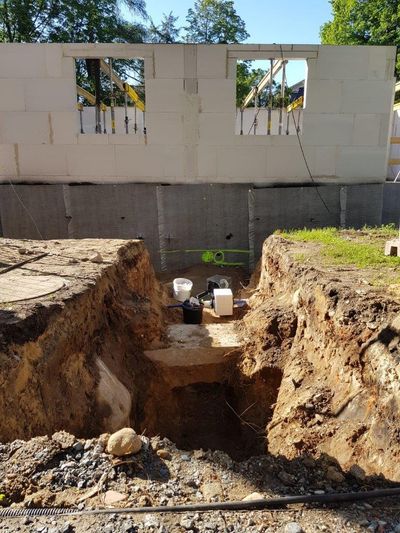 Pipe route for the gas and water house connection

The PMBC outer skin can be recognized by the black overspray above the dimpled sheet. 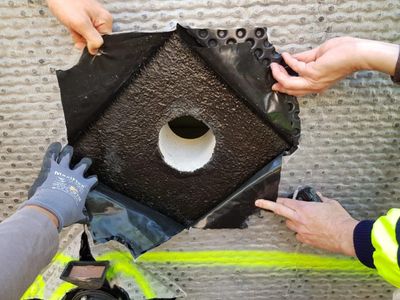 Exposure of the core drilling

A dimpled sheet was attached to protect the PMBC layer. The dimpled sheet is a purely mechanical protection and does not itself fulfil any sealing function.

To be able to securely connect the building entries with the Schuck sealing flange 18533 to the PMBC layer, the dimpled sheet must therefore be cut in the area around the core drillings and folded to the side. 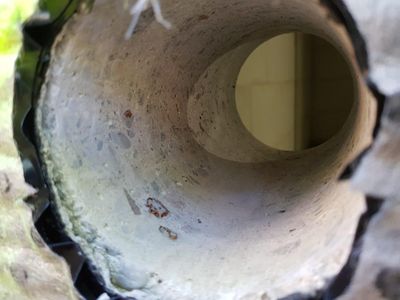 Outside view of the core drilling

The core drillings for the house entries for gas and water penetrate the entire wall including the PMBC outer layer. 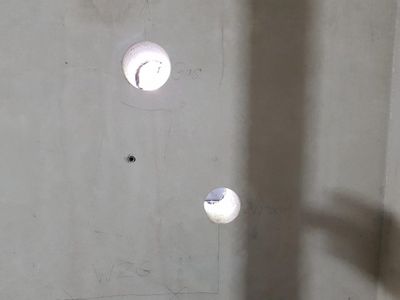 Inside view on the core drillings

House entries for gas (above) and water (below). 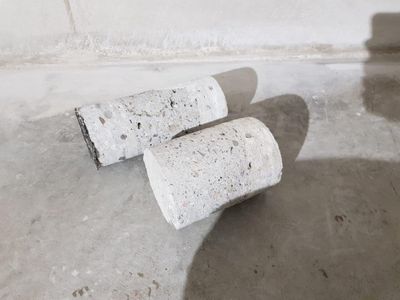 Analysis of the drill cores

The two drill cores allow a look into the wall structure. It is easy to see that the basement wall is a filigree wall / double element wall that was created using factory-made concrete formwork that was poured on site. On the upper core, the PMBC outer skin can be seen on the left. Immediately afterwards an approx. 5cm thick coarse-grained concrete layer, which can also be seen on the far right. These are the two prefabricated elements of the wall. In between the fine-grain in-situ concrete.

Since the connection between the precast element and in-situ concrete is partially defective, as can be seen from the lower drill core, where the outer part has already fallen off, special attention and special components are required here in some installation systems in order to properly seal the house connection. Not so when using Schuck Beto-Fix Plus, which is also used here and which always fills and seals the entire core drill hole. 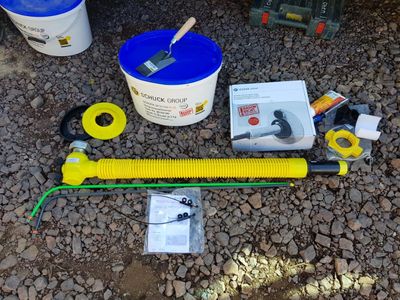 Required material for the creation of the gas house entry with the special feature that two Schuck Pipes (speed pipes for fibre optic internet / FTTX) are laid directly in one operation: 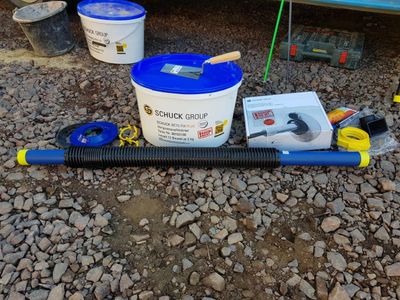 Required material for the creation of the water house lead-in: (It would also have been possible to lead the Schuck Pipes into the building with this house lead-in). 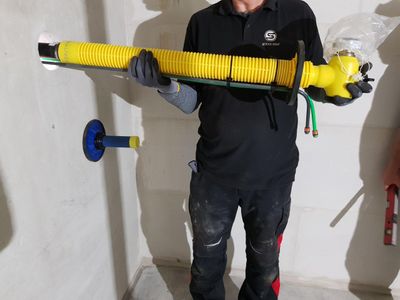 Insertion of the prepared building entries into the core drillings.

Below: The water house entry with the wall termination set installed has already been inserted into the core drill hole.

Above: The gas house lead-in with the mounted wall termination set and the Schuck Pipes is inserted into the core drill hole 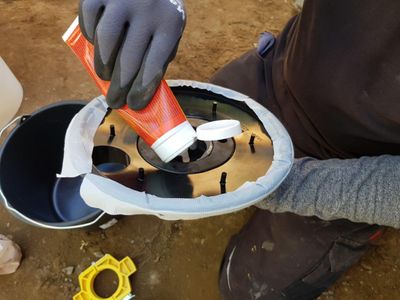 Preparation of the sealing flange

After the building entries have been inserted into the core bores, the sealing flange 18533 is mounted on the outside of the building. To do this, we distribute some lubricant on the rubber insert to make assembly easier. 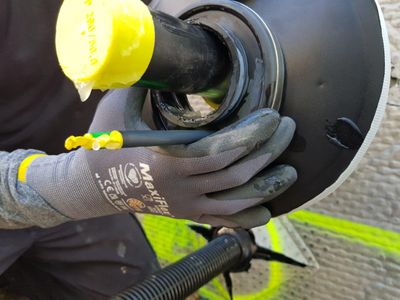 Attachment of the sealing flange

The Schuck Pipes are threaded through the two openings provided for FTTX below the building entry. 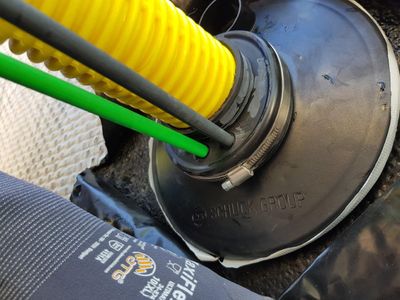 Positioning of the sealing flange 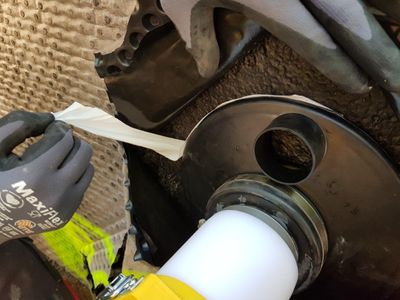 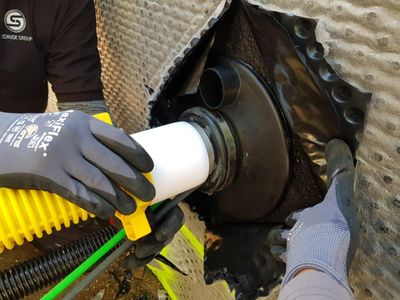 The process of sealing 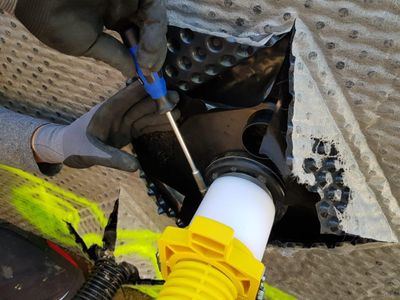 Fixation of the sealing flange 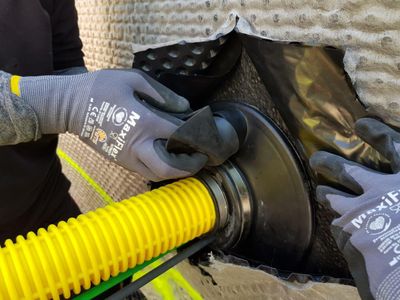 Preparation for grouting the wall duct

For the grouting of the building entry, the filling funnel is attached to the filling opening on the sealing flange. 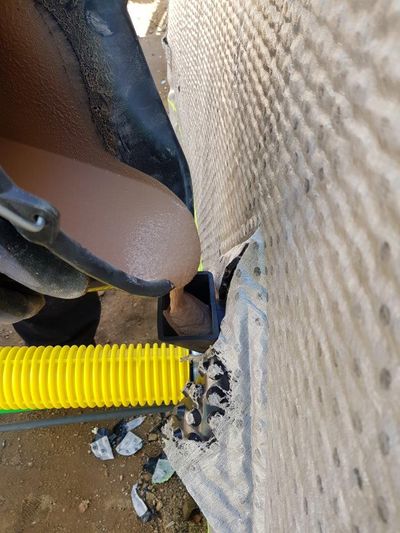 The corresponding amount of Schuck Beto-Fix plus is mixed and quickly poured into the filling opening. This fills the entire core drill hole as well as the sealing flange itself.

The level in the filling funnel serves as a control over the sealing. If the funnel is full and no more material flows out, then the core bore is also full and the Sealing Flange 18533 is completely back-filled. 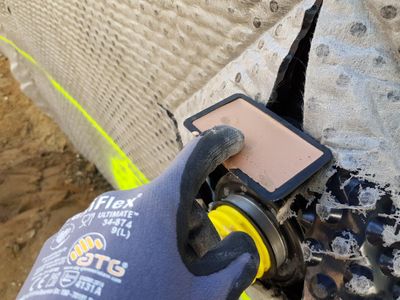 The filling funnel remains attached after the grouting until Schuck Beto-Fix Plus begins to set after approx. 10-20 minutes. 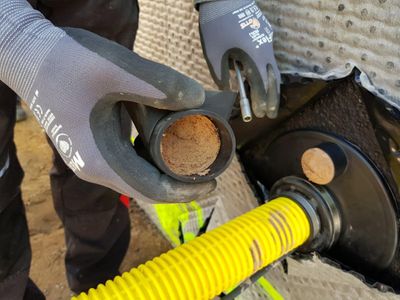 The hopper is removed and cleaned. As a reusable tool, it can be used together with the adjusting nut and the spacer sleeve for other construction sites. 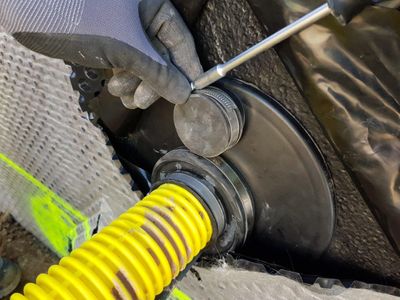 Sealing of the filling opening

The filling opening on the sealing flange is closed with the cap and secured with the tightening strap.

The building entry is now installed and sealed in accordance with DVGW VP601 and DIN18533 standards. In addition, the house connection is also radon-tight, which recent tests confirm and is becoming an increasingly important feature for installation materials. 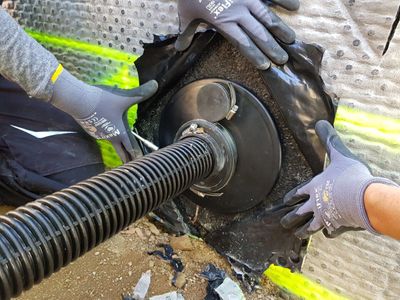 Radon-tight installation of all building entries

The water house connection is also installed with the 18533 sealing flange in conjunction with Schuck Beto-Fix Plus, in compliance with the standards , securely and radon-tight.

Thanks to the Schuck round thread jacket, which is always the same for gas, water and electricity house entries from Schuck and only differs in the nominal widths, the available accessories can be used for all media. 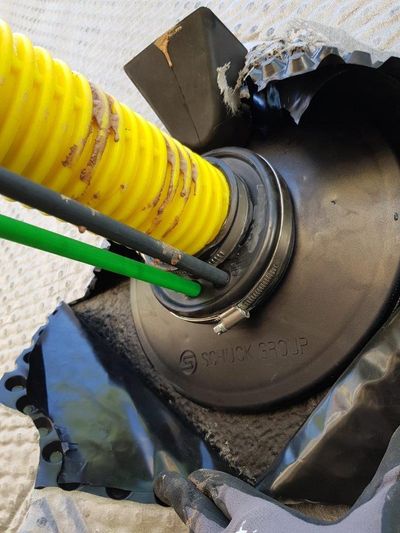 Two openings for the Schuck Pipes are integrated in the sealing flange 18533 , which allow a standard-compliant seal when laying with a media line. (We expressly recommend using only the Schuck pipes here, other speed pipes are not designed for pouring and lead to leaks). 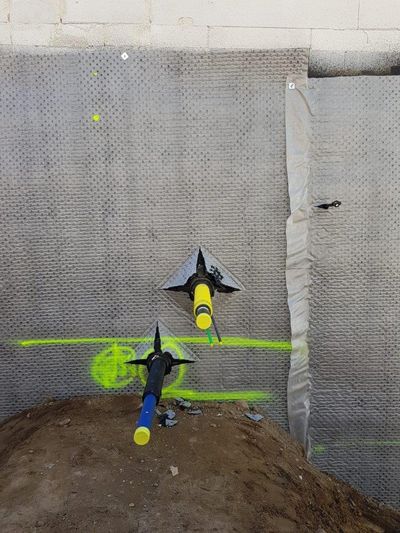 View from the outside: The two building entries fully integrated into the building seal 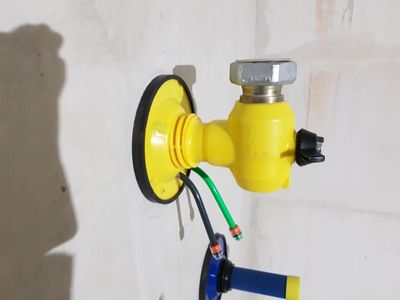 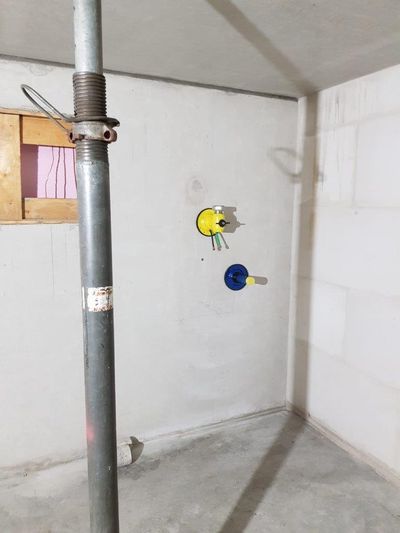 Completion of the construction site

More about the Sealing Flange 18533